WHEREAS, Mr. Ling served his community as an educator for over thirty years, beginning in Statesboro, GA in 1964 and retiring from Dorchester School District Four in 2009; and

WHEREAS, Mr. Ling’s expanded community service included serving two terms on the Dorchester School District One Board with one year as Chairman, President of the South Carolina Association of Title I Coordinators, first Chairman of the Dorchester County First Steps Program, charter member of the St. George Rotary Club, member of the Tri-County Chamber of Commerce Board of Directors, Chairman of the Trinity United Methodist Church Council and former radio announcer for WQIZ radio for more than 70 years; and

WHEREAS, Mr. Ling was devoted to his community and served tirelessly to promote education and economic prosperity for Dorchester County for over 55 years; and

WHEREAS, Mr. Ling is known for his infectious laugh and always having a good joke.

NOW, THEREFORE, BE IT RESOLVED that Dorchester County Council wishes to honor the service of Mr. Linwood L. Ling and express its gratitude for his unwavering dedication of service to the citizens of Dorchester County.

BE IT FURTHER RESOLVED that upon adoption of this Resolution, the original shall be presented to Mr. Linwood L. Ling and a copy filed in the permanent records of Dorchester County, South Carolina. 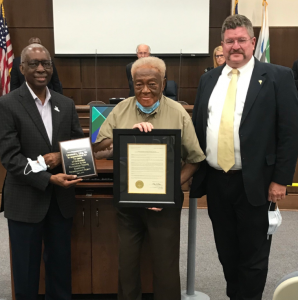